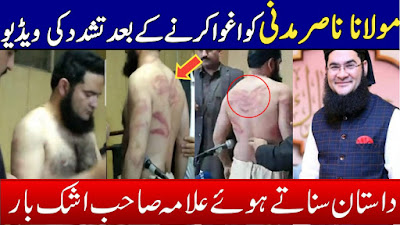 According to details, Pakistan’s renowned Khateeb Maulana Allama Nasir Madani was brutally tortured after being abducted by the kidnappers. Al Nasir Madani’s condition became unstable due to violence. While signs of violence can be clearly seen on their bodies. Allama Nasir Madani, along with his lawyers, talked to media representatives at the press club and showed signs of torture on the body, saying that I was threatened by the kidnappers on the day you were exposed to the media. If you go, that day will be the last day of your life. While the kidnappers made me sign my video on two simple papers, I also made a video. Talking to media representatives, Allama Nasir Madani called on all law enforcement agencies, Prime Minister Imran Khan, Army Chief General of Pakistan Qamar Javed Bajwa and Chief Justice of Pakistan to protect their lives and property from them. I should also be provided justice immediately. Because of the danger to my life, I should also be provided security. Which is the basic right of the citizen of any state.Allama Nasir Madani told media representatives about her unspeakable violence that I was tortured with iron pipes, rods, wooden poles and even knitting while rope and video by the accused. Was also made. While I know the reason for torturing me is that I was subjected to torture by kidnapping people who used to fake money and treat people with coronyoa virus is No action was taken by the authorities regarding my request for threats made in the Civil Secretariat. However, an FIR has been lodged in connection with the brutal violence against me and IG Punjab has also been contacted who have assured to arrest the accused as soon as possible and to bring them to the role of kafir.
Facebook
Twitter
Pinterest
WhatsApp
Previous articleWomen’s Exercise for flat Stomach
Next articleCorona Virus: Block Blocking of Mobile Devices Suspended